What a Skatepark means to me

I can’t deny time, so I guess I’ll just start like this:

Back in my Day…

Back in my day, Skateparks were few and far between. I grew up in Philadelphia in the Northeast in what is known as the Wissinoming / Frankford section.

You may think I am saying that as a shot at Philly, quite the contrary.

I’m thankful everyday for the half of my life that took place in Philly.

When it Started for me

I was probably around 13ish (1994-95) when I started Skateboarding. During this time, it was like a surge of skaters coming up and Skateboarding was truly taking off in what I consider the Golden Era of Skateboarding, but I am biased given the era I came up in.

For a better idea of that era, imagine Mid-90’s meets Kids from an Entertainment perspective.

So where did we Skate?

We skated where we chilled, and in that case, it was a playground two blocks from my house, Moss Playground. When we weren’t there, we were on the streets.

Whether it was damaging the granite at the local church (St. Bart’s), or flying down the incline at the Doctor’s Office across the street, or getting chased by a man with a shotgun for board sliding his front rail, we were kids just trying to have fun, compete and be part of something.

None of the above we were proud of, it was just a part of being in the environment that we were in.

Eventually FDR Skatepark was built, but we didn’t have cars or necessarily feel like taking the hour plus SEPTA ride from where we were at.

We just wanted a Skatepark, and we tried. We tried hard. And after some time, it worked!

A look Back – The Moss Era

When we weren’t at FDR, LOVE, City Hall or any of the other amazing places to skate in downtown Philadelphia, we resided at our homebase, Moss.

We felt back then that if we weren’t going to be provided a Skatepark, we would start to build our own.

So we scavenged, we trash-picked and stole our way into creating the Moss funbox. 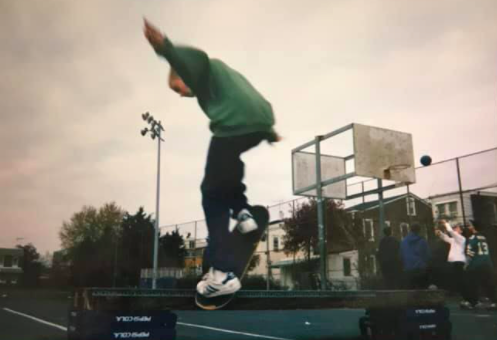 This was one obstacle that we had back then amongst many others.

So many in fact, that we had a legit DIY Skatepark! We actually had it going for a while.

Living the Life (for a degenerate)

For many of us back then, we couldn’t have asked for more, we felt like we were running shit at that playground.

On a bad day there were probably about 30 of us at there, not all skaters, but all in the likes of one another, and we had each others backs (for the most part).

As you can see in the pic above, we would take over the basketball courts and throw down tricks for like 10 hours and then, most likely try to find booze, given the day of the week.

It was a simple life for a Skateboarder in that time. We were hated by most, but we didn’t care.

“Damn Skateboarders”, “Do a kickflip duuuuuude”, or as harsh as being called terms I’d rather not mention in this post as it’s for the Norristown Community and it serves no value to mention.

We wore these scrutinies as a badge of honor. That’s what Skateboarding was and in my mind, still is.

The Night it Ended

I remember this night pretty well because us having that setup there meant the world to me. Two blocks away from home where I played my sports as a youth.

What more could I ask for?

I think we were skating somewhere in the streets and we came back to see pretty much all of our boxes, ramps, quarter pipe and more had all been damaged beyond repair. The sad part is that wasn’t the first time it happened.

Faced with the challenge of the streets, we decided to join forces with the peeps at Whitehall, which is right across the street from Harding Middle School.

Still having some half decent and usable stuff, we somehow got all of it to Whitehall.

Fast forward 10 years, Whitehall became a known Skatepark in Philadelphia, and I couldn’t be happier about that.

Being much older and wiser, I realize the importance of Community and Culture. That is what I want to focus on in this Norristown Skatepark effort.

The culture spans across music, art, streetwear/fashion and most creative areas. The culture revolves around the triumphs of overcoming repeated failure and sharing that feeling with others.

This feeling is the reason I started Skateboarding Saves, to give back to Skateboarding. And it seems as though this is the beginning of my journey.

Enjoying the site? Join for free to stay up to date with the latest at Skateboarding Saves. Peace and LOVE!